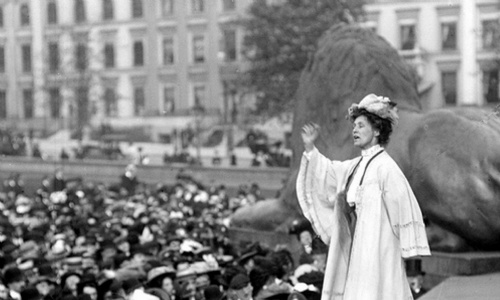 Today's assembly continued with this half-term's theme of 'Inspirational People'.

We discussed what life was like in Britain for women before WWI.
There were gasps and groans of discontent when I announced, that at that time, many believed women could not be doctors or lawyers and that for many jobs they were paid substantially less than men.
After this discussion, we explored the life and efforts of Emmeline Pankhurst and the Suffragettes. We also discussed how WWI changed the view of women in the workplace.
It was wonderful to hear cheers and see broad smiles on faces when I announced that in 1928 all women over the age of 21 were able to vote and that by this time the views of women working had changed.
We ended the assembly by discussing how life in Britain has changed since the early 1900s for women. We agreed these changes are for the better and that equality is something worth fighting for.

Miss Desmond and our librarians are going to locate books about Emmeline Pankhurst and will share where these are with the children shortly.