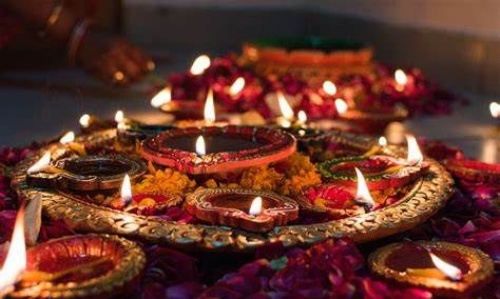 During our whole school assembly this morning, we explored the Hindu festival or Diwali.

This year, Diwali was celebrated on Tuesday 25th October (last week whilst we were on half term).  Diwali is an important religious festival which is celebrated by Hindus, Sikhs, Jain and some Buddhists.  It is also known as the 'Festival of Lights' and marks the beginning of a new year in some parts of the world.

During the festival, Hindus celebrate the legend of the return of Rama and Sita. Diwali is also linked to Lakshmi the goddess of wealth. Hindus light lamp to help Lakshmi find her way into their homes and doors and windows are left open so that she can find her way in. Many Hindus also decorate their homes with Rangoli patterns.

As well as watching clips of Diwali celebrations from around the world, we discussed why it is so important that we learn about world religions and their festivals in school.

We all agreed that it is important to study world religions to increase our knowledge of the world and better understand the lives of others.  The children also suggested that learning about world religions is fascinating, and it often links with other subjects for example Year 5 produce Rangoli patterns in Art.

We ended the assembly by thinking about how studying world religions links to British Values:

Individual Liberty: In Britain, we think everyone has the right to believe, act and express oneself freely.  This is why it is so important that we learn about world religions because it enables us to better understand differences and also to celebrate aspects of life that other people value.

Tolerance of those of different faiths and beliefs: Alongside people having the right to believe, act and express oneself freely, in Britain, we also think that we should respect and celebrate differences. Accepting differences is not enough, we should strive to understand differences so that we can understand how individual’s personal identities are formed.  Through learning about differences, we become better able to celebrate the diversity of Britain.